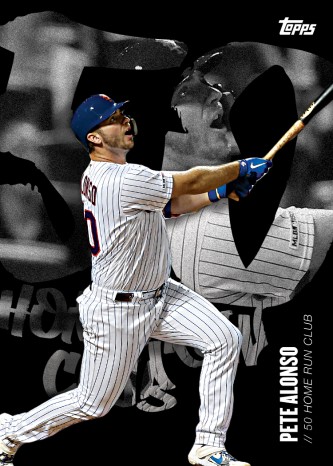 In (the first) Spring Training, Topps met up with 2019 Rookie of the Year Pete Alonso to develop his own curated card set. Today, Alonso’s inspirations hit the collecting scene, as Topps introduces the 50-card series with a decidedly New York feel.

Some of the elements selected by Alonso include NYC street art (bright colors, graffiti lettering, bright textures); and “Molon Labe” derived from King Leonidas, leader of the 300 Spartans at the Battle of Thermopylae, which Alonso says captures his approach at the plate.

Included are 20 base cards featuring top stars of today, plus 30 insert cards with Alonso’s season award picks, the 50-homer club (of which Alonso became a member last year), franchise favorites and more, all with strong ties to the second-year Mets star.